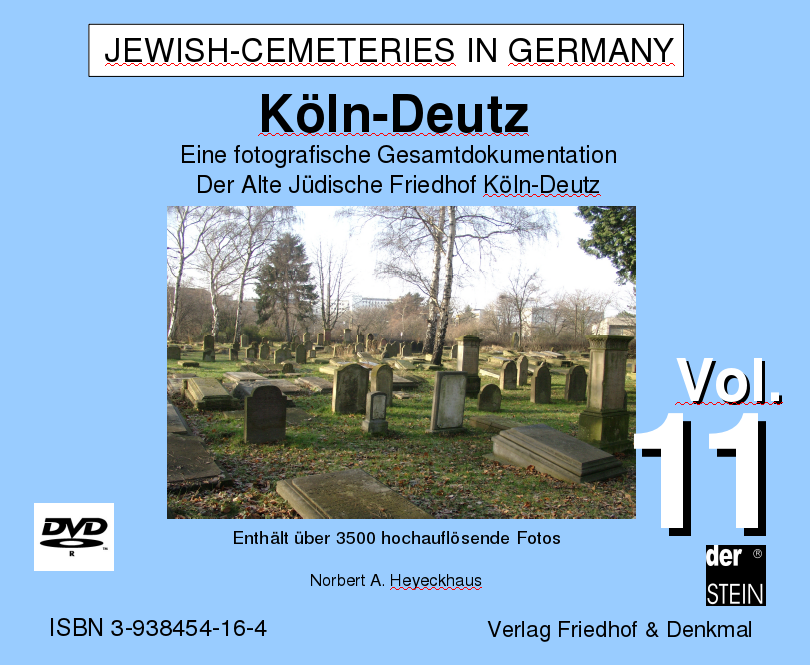 Vol.11. The Jewish cemetery in Cologne-Deutz.

The land left as a Jewish cemetery by the Archbishop of Cologne in the year 1695 to the Jews who lived in Deutz is an area approx. 18,000 square meters in size and is located at what is now known as the „Judenkirchofweg“ („Jews‘ Churchyard Way“).

This was where the first burials took place from the year 1698 and some gravestones still exist from this period, particularly in the sections Q, and P to Y.

Standing gravestones were set up here until 1859; between 1859 and 1882 the military authorities ordered that only horizontal gravestones could be set up, then after that standing ones again.

The cemetery in Deutz was in use until 1941.

Among others, the following gravestones can be found on the Deutz cemetery:

Moses Hess (1812-1875) Derived his Zionism from the west of Judaism as a national community. (reburied in Jerusalem)

The tomb of the family of Salomon Oppenheim (Teresa Oppenheim), founder of the synagogue in the Glockengasse.

Prof. Hermann Schapira, „father“ of the Jewish National Fund and the Hebrew university in Jerusalem (died in 1898, reburied in Jerusalem in 1953).

The documentation records all the gravestones and memorial slabs which are still intact on this burial ground in more than 3500 photos.